Nearly 6,000 years ago, a wary farmer named Shennong (神农) was trying to find safe food and remedies for his people, so they wouldn’t suffer from hunger and disease.  He began roaming the mountains and forests, and one day, while he was out roaming the forest for edible grains and plants, he encountered seventy-two (yes, 72!) poisonous herbs that almost killed him.  Shennong felt so weak and stumbled to the ground.  His body couldn’t bear the poison.  While he was laying there on the ground, he reached out and grabbed some of the leaves that were lying next to him and put them in his mouth.  He started to chew on them… and lo and behold, the leaves immediately revived him!  Pleasantly surprised by the leaves’ healing power, Shennong grabbed more of the leaves and raced back to his village to tell his people.  And this is how tea was discovered… at least according to this wild ancient Chinese legend. 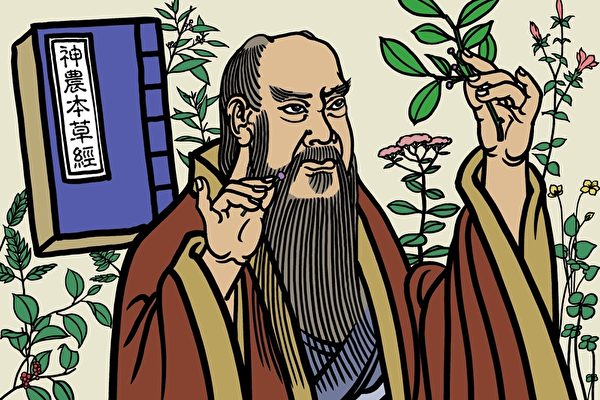 For the next couple thousand years, tea leaves were primarily consumed in China as food and eaten with grain porridge.  It wasn’t until about 1,500 years ago that cultures around the world realized that a combination of heat and moisture could tease out a complex and delicious taste from the tea leaf.  Different groups in China started experimenting with how to create the best tea beverage, and eventually, around the 8th century A.D., during the reign of the Tang Dynasty, the standard became to heat the tea leaves, pack it into a portable cake, grind it into powder, and mix it with water.  The Chinese called this beverage "Mo Cha" (抹茶), or better known today as “Matcha.”  Matcha became so popular in China that a distinct tea-drinking culture was immediately born. Tea became the subject of Chinese books, poetry, and art, and was the favorite drink among emperors (pinkies up!). 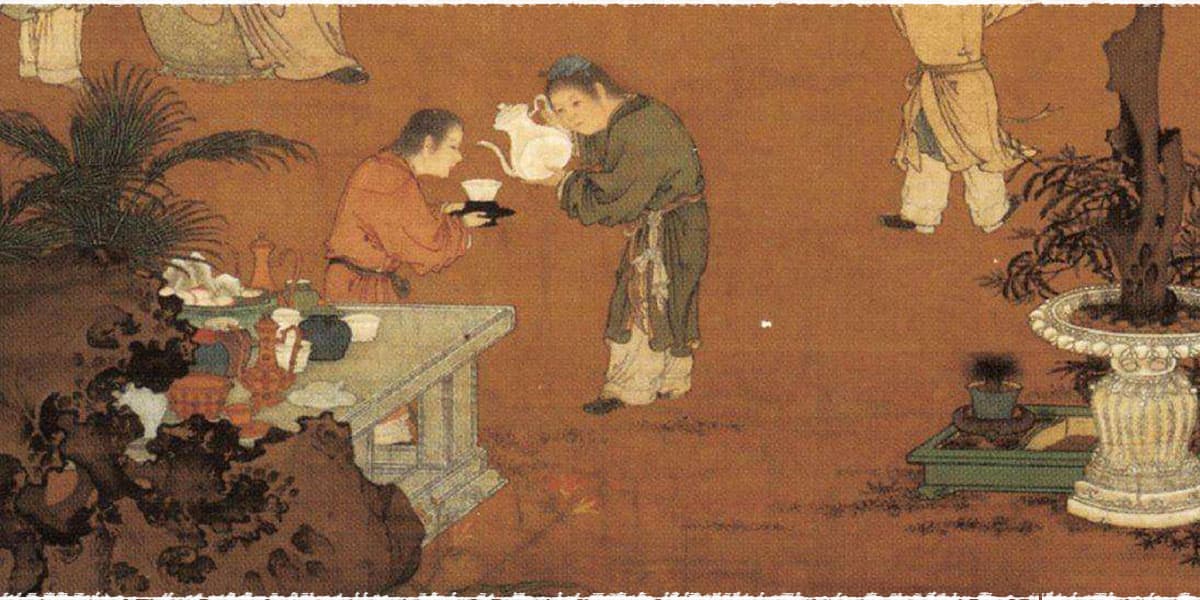 During the reign of the Tang Dynasty in the 8th century A.D., matcha became so popular that a distinct Chinese tea culture emerged. It was the subject of books and poetry, the favorite drink of emperors, and a medium for artists.  For example, some artists would draw extravagant pictures in the foam of the tea, much like the espresso art you see today in those yuppie coffee shops around downtown. 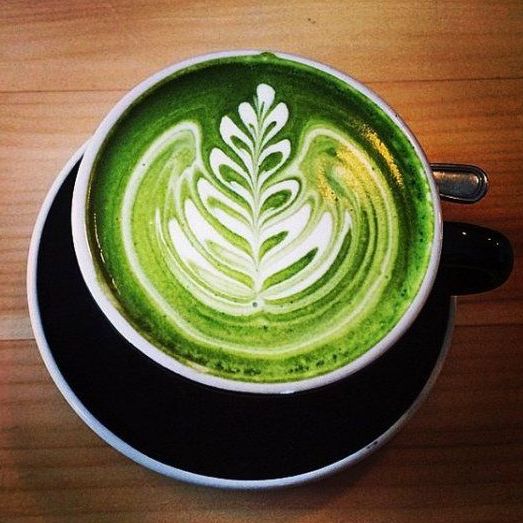 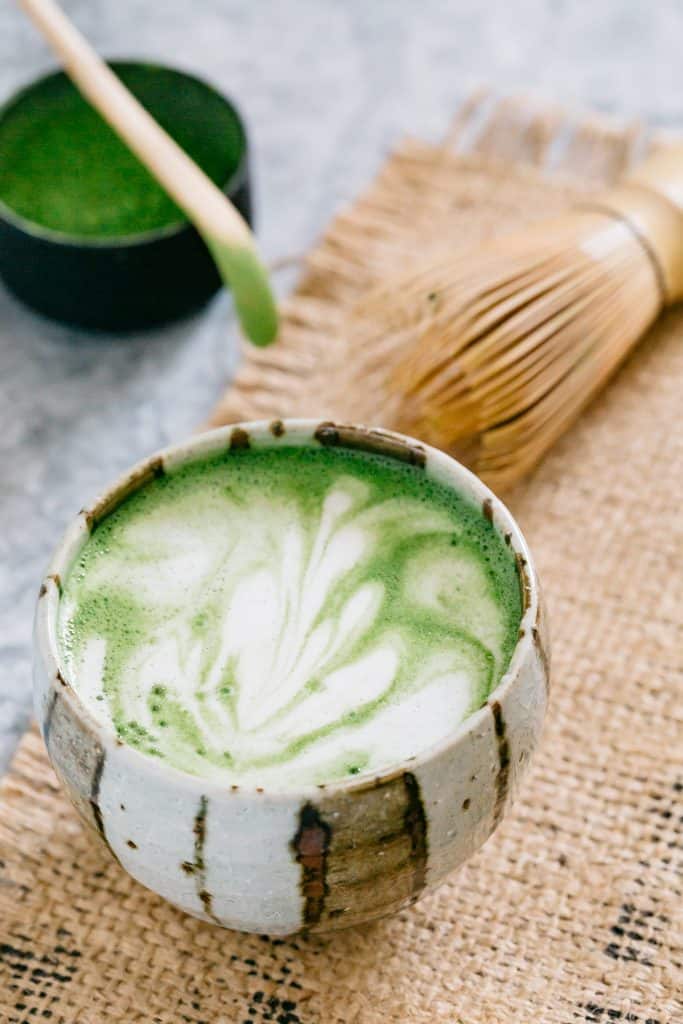 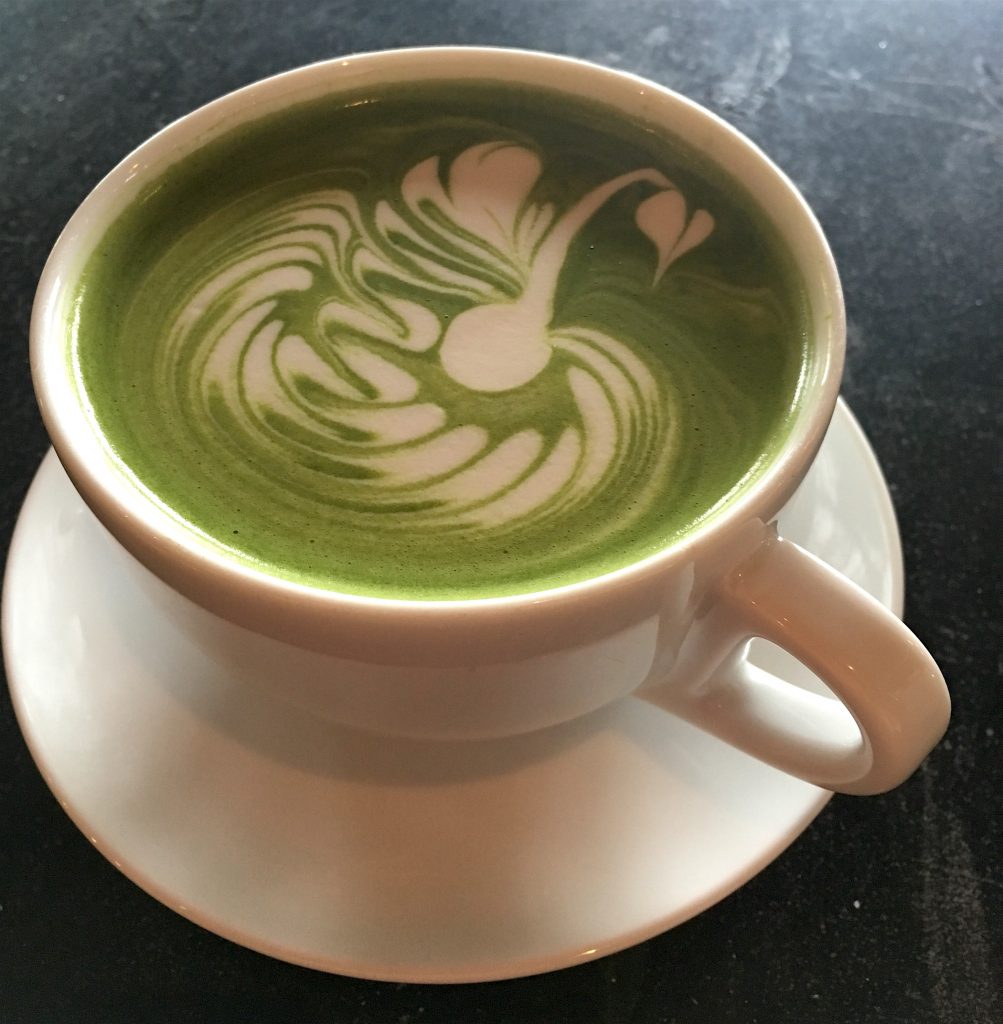 In the 9th century, a Japanese monk, who had traveled to China to study, brought the first tea plant back to Japan.  The Japanese developed their own rituals and customs for drinking tea, and eventually, tea drinking became a vital part of Japanese culture, as seen in the development of the Tea Ceremony.
Japanese Tea Ceremony 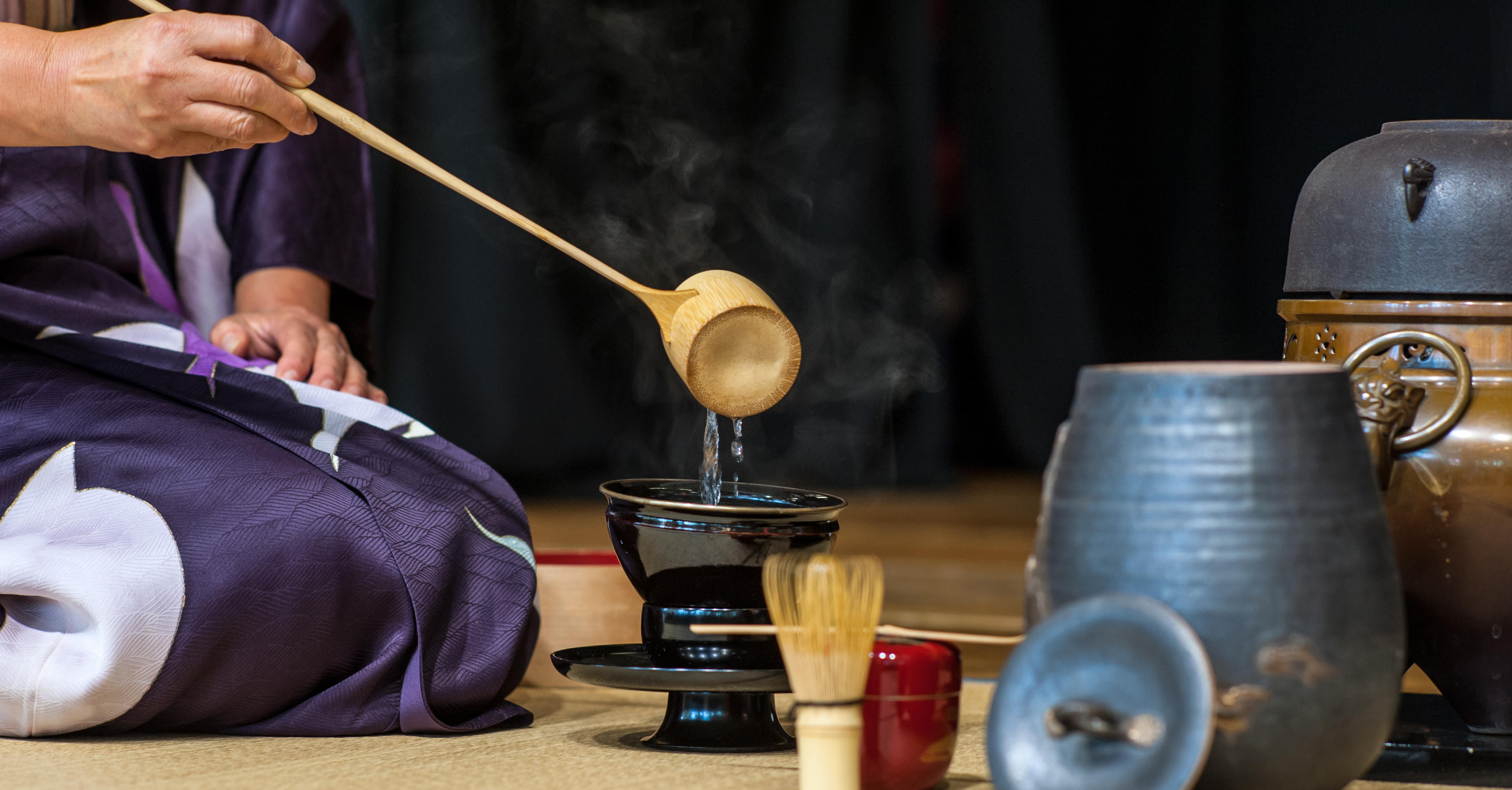 Fast forward a few hundred years to the 14th century, during the reign of the Ming Dynasty, the founding emperor Zhu Yuanzhang (朱元璋), decided that cake tea (or tea “bricks”) was no longer acceptable and issued a decree that only loose-leaf tea would be consumed.  By the end of the 16th-century, loose-leaf tea had replaced the earlier versions of cake and powdered tea.  The reason why Emperor Zhu’s decree is so important to the history of tea is because the shift to loose-leaf tea opened the door for more economic methods of packaging and selling tea, instead of the expensive and cumbersome tea “brick.”

In fact, there is a legend about this! Once upon a time, a monk sat on the top of Wuyi Mountain, meditating all day long.  Confucius (we know that guy!) came to visit him one day.  The monk, wanting to make a nice impression, started to prepare some tea for Confucius.  The monk went to great lengths to prepare the tea in accordance with all the ancient rules of the Chinese tea ritual “Gongfu,” which used tea cakes. As with any meticulous process, the tea brewing was taking quite a bit of time…

Confucius finally said, “Why are you spending so much time preparing a cup of tea? It is much easier to drop a tea bag into a cup and be done with it.  Life is too short, and one should not waste time on things which are of no substance and no taste.” 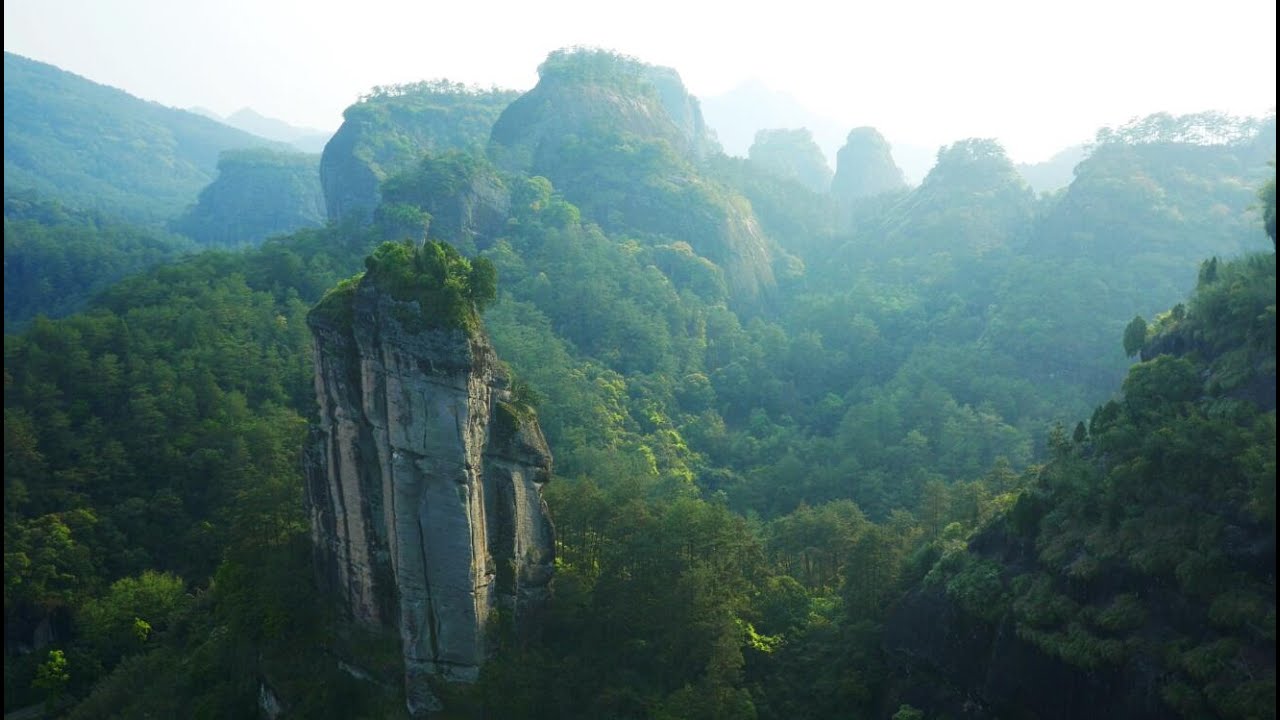 At this point in time, China still held a virtual monopoly on the world’s tea trees, and tea was one of China’s top three export goods (along with porcelain and silk).  This gave China a great deal of power and economic influence around the world, especially as tea drinking began to spread around the world. This spread really began to pick up in the early 1600s when Dutch traders brought back large quantities of tea to Europe for the first time… and once the Europeans got their hands on these delicious tea leaves, everything changed…

In the early 1600s, the Dutch traders purchased a bunch of tea and brought it back to Europe. It wasn’t an instant hit with the Europeans, though, until Queen Catherine of Braganza got her hands on it.  One sip of that refreshing black tea, and she was hooked. She couldn’t help but share this new, wonderful beverage with her husband, who happened to be King Charles II of England.  King Charles II loved it so much that he shared it with the rest of the English aristocracy.

As Great Britain’s global dominance grew in the 1600s and 1700s, so did the popularity of tea around the world.  By the mid-1700s, tea was selling for more than 10x the price of coffee in Great Britain, and the tea plant was still only grown in China at this time.  The tea trade actually became so lucrative that the fastest sailboat in the world (the Clipper Ship) was invented specifically to beat out other western trading companies who were also traveling back and forth from China to buy and sell tea.  All of these companies were intensely competing against each other to maximize their profits in the tea trade. 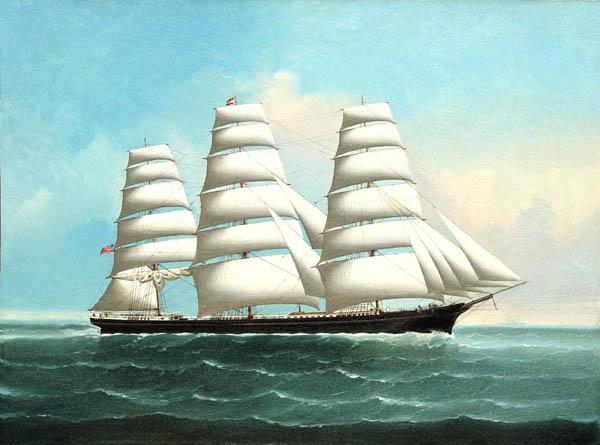 Great Britain was paying for all this tea using silver, but eventually, silver became too expensive for Great Britain to trade with, so they suggested to China that they trade tea for another substance: opium. (Ya, you know where this is going…).  This immediately led to a public health crisis in China, as many Chinese became addicted to opium.  Then, in 1839, the outhouse collided with the windmill (as my grandmother would say). Chinese officials in Guangzhou ordered more than 20,000 chests of opium (1,400 tons) to be confiscated and destroyed.  Tensions rose between China and Great Britain, and violence erupted over the next several years up and down the coast of China, where Great Britain attacked various cities in China and eventually took control of the city of Nanjing in 1842. The Treaty of Nanjing was inked shortly thereafter, putting a stop to the fighting, but China paid a large sum to Great Britain and ceded the island of Hong Kong to the British. The Opium Wars weakened China’s standing in the world for the next century.

The Treaty of Nanjing

Trading resumed between China and Great Britain but on very unfavorable terms to China. Great Britain continued to grow hungrier (or should I say “thirstier”) for power in the tea market, but in order to really become a player, they needed to figure out how to get their hands on the actual tea plant and grow it back in Britain.

With China hurt, Great Britain sought to capitalize on the opportunity.  Even though they had a sweetheart deal from the Nanjing Treaty, they still didn’t have possession of the source of the tea - the tea plants. All tea was still grown in China at this time, and China would not sell any of the tea plants to Great Britain. The British East India Company believed that if they could access the tea seeds and plants in China and find a way to grow and harvest the tea themselves–perhaps in their tropically-inclined colony of India–then the British could cut China out of the tea trade completely.  So, the East India Company commissioned Scottish botanist, Robert Fortune, to go into China and infiltrate China’s tea farms.

Fortune disguised himself and took a dangerous journey through China’s mountainous tea regions. Eventually, Fortune was able to smuggle over 13,000 species of tea plants and 10,000 seeds from China’s provinces. He also recruited experienced tea farmers and smuggled them over China’s border into the Darjeeling region of India (which was owned by Great Britain at the time). The whole operation was a huge success for Great Britain. They were able to find ways to grow, harvest, and manufacture tea on their own in India and quickly began cutting China out of the tea trade. China’s exports of tea during the latter half of the 19th century fell from 130,000 tons per year to 9,000 tons. China quickly fell behind in the tea trade, and other countries followed Britain’s lead and began conducting their own raids on China’s tea provinces. China was irreparably damaged for the next hundred years, and their economy would not recover until the mid 1950s. In fact, China wouldn’t claim the title of world’s largest tea exporter again until 2016.

The one good thing that came out of Fortune’s successful infiltration of China’s tea farms is that tea began to spread rapidly across the world, becoming an everyday commodity for many people. It grew so much in popularity, that today, tea is the second most consumed beverage in the world behind water. From Tibetan butter tea to Turkish Rize tea to South African rooibos tea, there are as many different types of tea in this world as there are cultures. So however you take your tea, cheers and pinkies up!

We hope you enjoyed this post on the history of tea. If you'd like to explore our Tea Menu–which boasts a variety of teas from different cultures all over the world–you can check it out here :)

We Put the “Tea” in Teacher Appreciation

This tea just works well with my body. I LOVE IT! IT IS MY FAVORITE SO FAR!

Love this tea. Helps with the wind down after a sweet day. Gives the right signals to the body. Thank you.

I discovered TWT a few months back and I am a lifer now! This peppermint tea in particular has the perfect aroma, lasting flavor and is the perfect peppermint addition to any tea lovers collection!

The Bento box was surprising. Each tea bag of individual flavors steeped one of the best teas I have tasted in a long time!

I tried Bedtime Bliss as a sample and immediately added it to my monthly subscription, it's so soothing and tastes amazing, plus I sleep so well on the nights I drink it. Highly recommend!